Inspired by the popular Japanese manga, Shinya Shokudou (深夜食堂), a virtual cooking club was formed by a small group of passionate home cooks.  Shinya Shokudou means "a late night diner" in English. The manga is actually a collection of short stories set in a small eatery only opening after midnight.  It has a standard menu consisting of just a single choice, but the owner will try to cook any dish that the patrons request. The stories revolve around the lives of the patrons and usually one simple local dish is featured in each chapter.

Founded by blogger 偽主婦ki琪, she initially recruited some of her close friends to join exclusively, and now the member base has expanded to over 20 in just 6 weeks! The idea of this cooking club is that all the members will cook the same dish and blog about them on the same day.  The list of predetermined dishes of course comes from the manga but the members are encouraged to come up with their own recipes.  This is like the Iron Chef for the housewives!  The members "meet" virtually every Sunday and today is my first club meeting!!!

The topic for this week is Buta Kimchi (泡菜豬肉). Known as Jaeyook Bokkeum (재육볶음) in Korea, Buta Kimchi (豚キムチ) is the Japanese rendition of this spicy pork and kimchi dish.  I have always wanted to learn how to make this so I couldn't be more thrilled to find out that is my first Shinya Shokudou challenge.  The problem is, I have never made Japanese dishes at home so I had no idea how to make Buta Kimchi. I was prepared to make this dish every day starting the Monday until it comes out right so I wouldn't be embarrassing myself in front of all these experienced cooks in my first appearance.  Fortunately, it worked out very well the first time and Mr. Bear was very relieved that he doesn't have to eat the same thing every day for the last week.  Here's my Buta Kimchi recipe.  To show my respect to the club, even though this is a simple dish, I bought Kurobuta pork belly slices for it, but I'm sure regular pork would taste just as good. =) 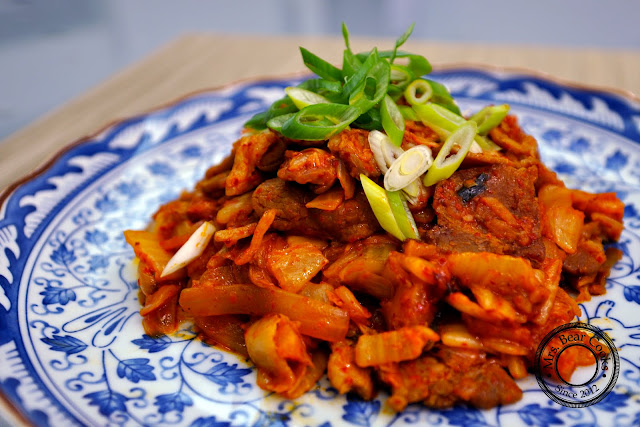 Method:
1. Heat up a frying pan until very hot and sear the pork belly slices on both sides.  There's no need to add oil since there's enough natural fat in the meat already.  Transfer the meat onto a plate leaving just a tablespoon of fat in the frying pan.
2. Add the kimchi and onion to the frying pan and stir fry for a minute.
3. Mix the gochujang, soy sauce, garlic and sugar together in a small bowl. Return the pork to the pan along with the seasoning and continue to stir fry until the kimchi turns translucent and the pork becomes tender, about 5-8 minutes. If there’s any extra liquid remaining at the bottom, turn the heat up to high and reduce until the sauce coats the meat and the kimchi.
4. Turn off the heat, drizzle with sesame oil, sprinkle with spring onions and serve.

p.s. You may have noticed that the title of today's post is Shinya Shokudou - Chapter 6. When I joined this club last week, the other members have already completed five challenges already.

p.p.s As I was expecting to go through many failed attempts before I could get it right, I bought a lot of kimchi.  I used the leftover kimchi on the next day for Miss G's favourite Korean Tofu Stew, which I will blog about separately.  For the time being, I hope you enjoyed my Buta Kimchi. =)

Let's take a look at other member's cooking! 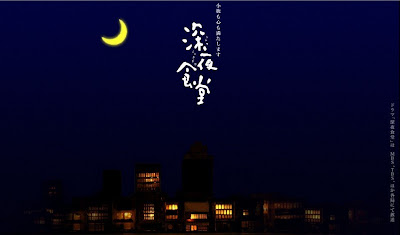